There’s a well-known phrase that you’ve probably heard – “if it ain’t broke, don’t fix it” – and that’s definitely the sort of pithy comment you could attach to the start of a review of a new Candy Crush game.

That’s not to denigrate King’s achievements though – every time I’m on some form of public transport, I can guarantee that I’m going to see at least one person playing on a version of Candy Crush. That’s how popular it is.

And that makes Candy Crush Friends Saga pretty interesting. There are some little changes to the formula here, and a new lick of paint as well. You wouldn’t be too far away from the mark if you were thinking this was Candy Crush 2.0. Or at the very least a step in that direction.

The core of the game remains the same. You switch the positions of shiny sweets, creating matches of three or more candies of the same colour. They then disappear from the board and some more treats take their place.

This time around the characters in the game are represented in 3D. They jog around, leer through the screen at you, and generally exist to a far higher standard than we’ve seen in other Candy Crush games.

Everything feels that little bit more poised and clean, but that’s hardly a surprise – the original Candy Crush is coming up on its sixth birthday, and it was never the best looking game in the world to begin with. 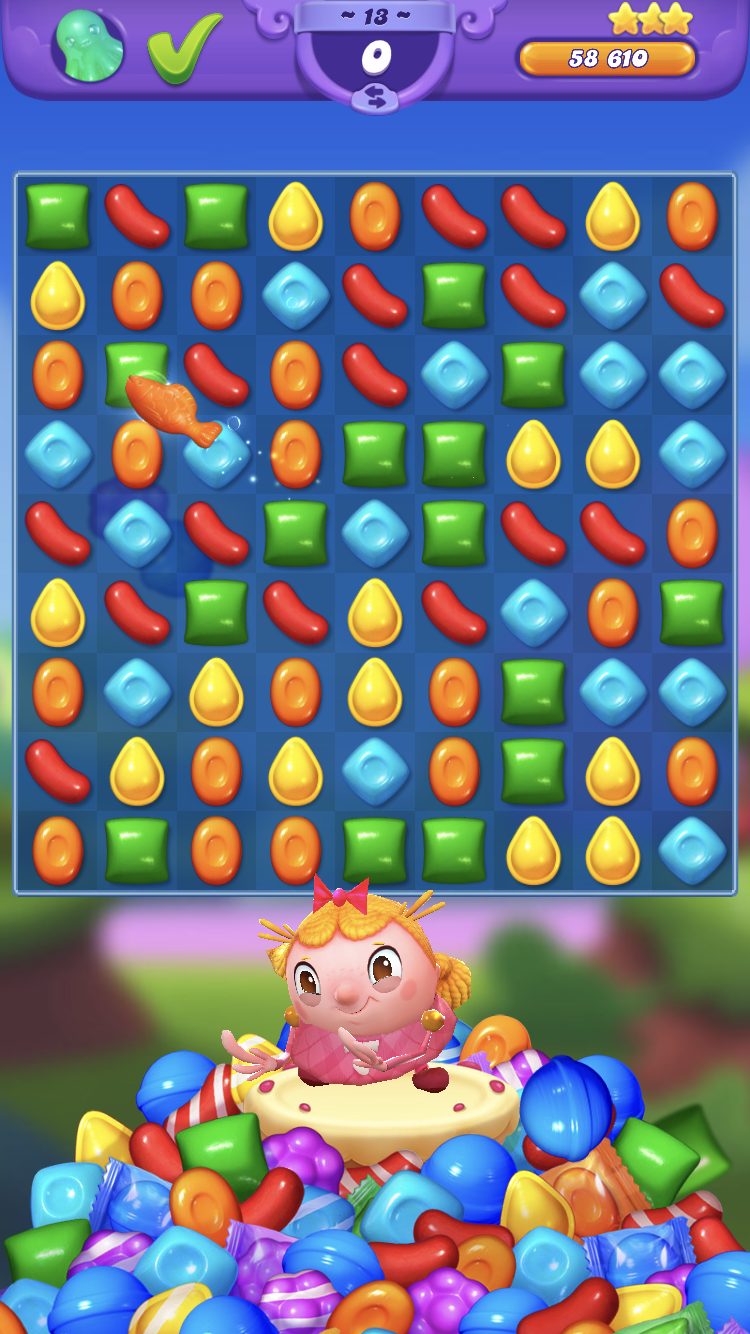 The series still sets the standard for free to play match-stuff puzzlers though, and it’s clear that King has designed Friends Saga to try and hold onto the pinnacle of that market for as long as possible.

You can adorn the characters you unlock with new clothes, compare your level scores against other players, and much more. It’s like the series is finally starting to move with the times, and adding ideas from other genres and titles in order to do that.

There’s not much in Candy Crush Friends Saga that you haven’t seen before, but then King games have never really been about pushing the boundaries of play. They’re safe, and that’s why so many people pick them up.

To be this long takes saga

This isn’t the King game that’s going to change your mind about the company. It’s a Candy Crush game through-and-through, unashamedly appealing to all the people who are enticed by bright colours and simple mechanics.

And you could complain that that shows how mobile gaming is mired in iterations, but really there’s a new CoD, FIFA, and Assassin’s Creed game every year, and I’m pretty sure you do the same things in all of them.

If the King bug has bitten you before, then you can be damn sure it’s going to do it again with Candy Crush Friends Saga. If you haven’t, well you’re not really losing anything except expertly timed dopamine triggers and something to do on the bus home.

Warning: count(): Parameter must be an array or an object that implements Countable in /home/forge/gameappsforfun.com/public/wp-content/themes/citynews/inc/functions/lib.php on line 51